This year my Puja pandal hoppings have been extremely limited. Firstly, the urge and stamina to walk kilometres to reach the end of a never ending queue in this sweltering heat at a pandal, only to come out an hour later jostling among the crowd, seems very unappealing after years of doing the same. Also, it seems much more convenient and meaningful to converse with friends who I don’t see regularly during these 5 days of continuous vacation. In spite of that, I accompanied my friends to a few pujas in the North, and a few in the South of Kolkata. What really gained my interest and appreciation were two of them: one very close to my home, and Naktala Udayan Sangha.

When I first saw it, I was honestly confused with the theme. About a few hundred tin trunks were stapled open to the skeleton of the pandal. Naktala Udayan Sangha usually attains simple themes with grandoise representation, without the evidence of trying too hard. Over the years, its themed pujas have gained wide attention of public and media, and is a centre of attention in the far south of the city. This year, it’s theme is very difficult to showcase: kaal or time. The passage of time is unidirectional, unchanging to us three dimensional beings. The different planes of time are being captured right here, within the pandal, surrounding the family gathering of what appears to be Maa Durga’s family. 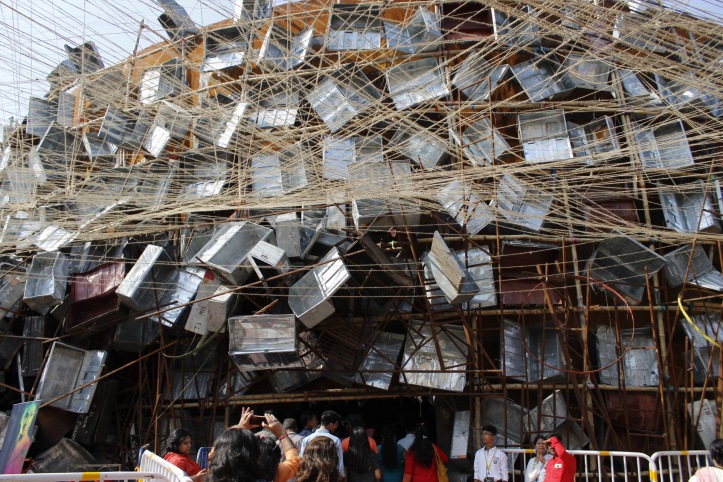 On entering there was a big clock hand ticking clockwise on a rotating machine, signifying the cirrcular motion of a clock. In it’s direction moved several gerua-clad men, ektara in their hands, around the sacred deities. The openness was a delight. The walls were painted and written upon, signifying multiple eras. Colourful strings were attached in interlocking planes, so that the art is not bound on just a flat surface. This amazing form of abstract art, which my sister thinks is Cubism but ain’t quite sure about it, makes Naktala Udayan Sangha live up to its reputation and name. 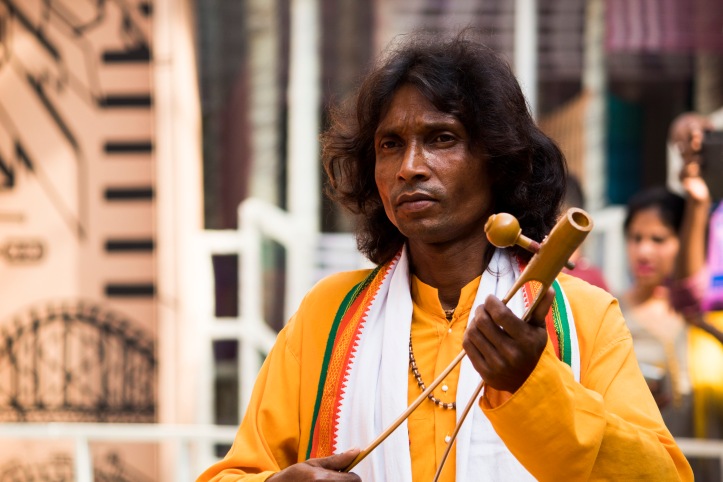 It’s hard to put a finger on it, but there was something very humane to the idols’ faces. Maa Durga was absolutely stunning, and almost like a next door happy woman. A slight sound was wafting through the air, which I later realised is a new Puja song by Asha Bhonsle, Ebar Pujoy Elam Fire Kolkatay. Naktala Udayan Sangha has upheld the tradition of puja song releases years after it has ended for good. After some time, Amit Kumar’s puja song came on, and humming to the new tune, we came out of the pandal. Naktala has outdid itself this time. 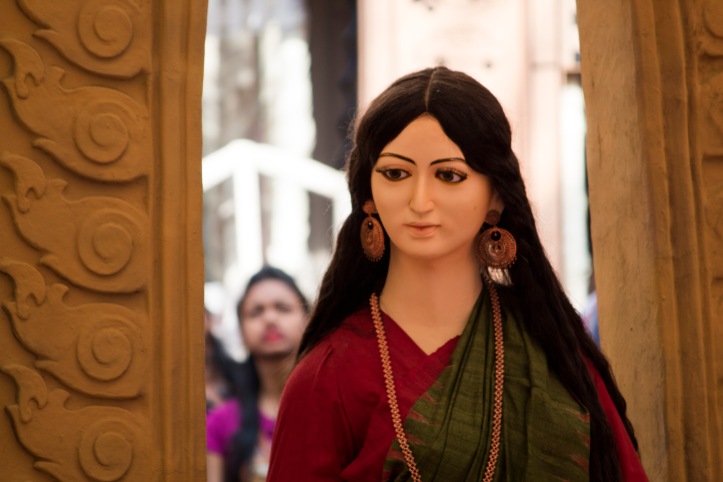 Tarun Sangha Puja is in my backyard, yet this year it’s form took us all by surprise and awe. The whole gully was cordoned off for the pandal entrance and dome. Mirrors, steel pots and wicker baskets lined the walls of the aisle, along with high statues topped with bouts of greenery. On entering the pandal, what I immediately noticed were bright red thin ‘hangings’ from the ceiling. The term to describe them escapes me, but it’s the closest I’ve got. After that, this figure caught my eye and I understood what the theme was.

The background music was carrying lines from Bhuter Raja Dilo Bor. The sheer amount of bamboo and wicker craftsmanship was inspiring to the point of jaw dropping. I could never have imagined this beauty right next to my home, making a swooping entry into Kolkata’s lineup of themed pandals. There was a metallic sheen on top of the wooden structure, emanating a silver and green glow very reminiscent of fabled mystical forces of the forest. Soldiers of Bhuter Raja were standing in tight formation in the middle hallway. For those of you who don’t know, this theme is based on legendary personnel Satyajit Ray’s Gupi Gyen Bagha Byen trilogy, where two simpletons orphaned by their own homelands, find each other through love of music, gaining the eye of the King of the Ghosts in the forest, who grant them three wishes to go anywhere, wear anything and eat any food, as long as they say their wishes together with the clap of their hands. Also while they would sing, no one could move from their positions, not even the elements of Earth, until they are finished, making everyone around them their audience rapt in attention. With these boons to their advantage, they embark on perilous exciting adventures and live to tell the tale about it by becoming real kings of large provinces.

Finally, I entered the antechamber and saw the stunning idols. A priest was there conducting the rituals, and it was every bit as beautiful as the halls preceding it. I bowed down my head in prayer, while the hall continued to hum with the reverberation of the chanting.

An added bonus during this time was posing for pictures in front of the sculptures in the aisle leading to the pandal. Unintentionally, my best friend wore the same top and jeans as I did, and we had a huge laugh about that throughout the day. Of course, accompanying us here is my boyfriend, who is also our de facto photographer. 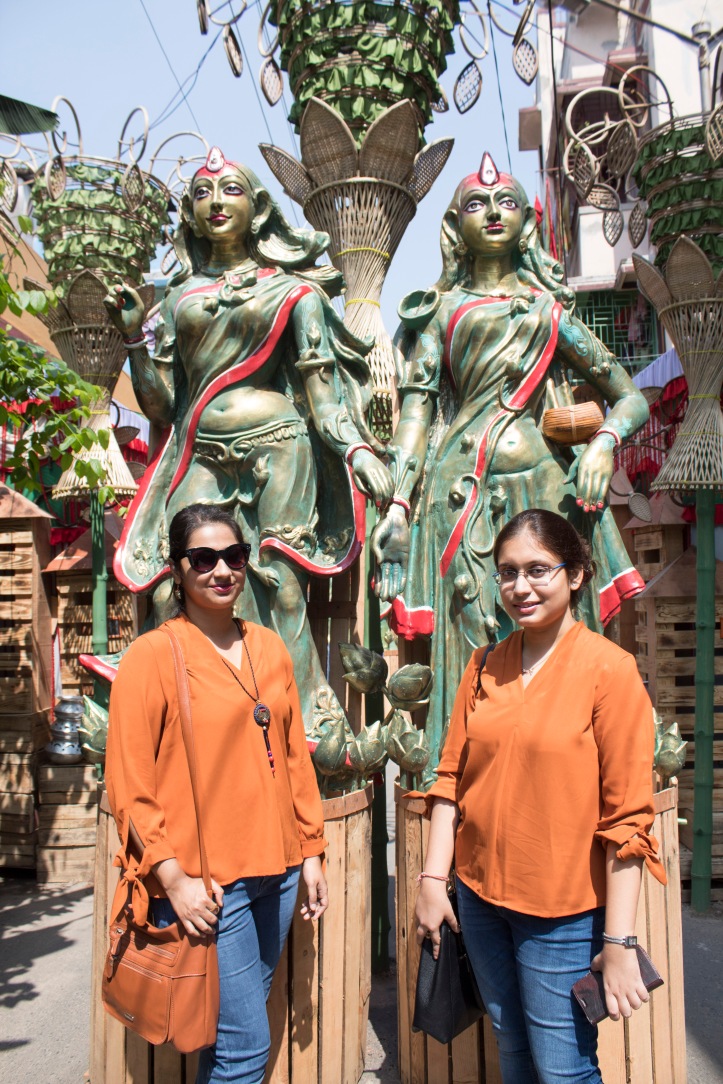 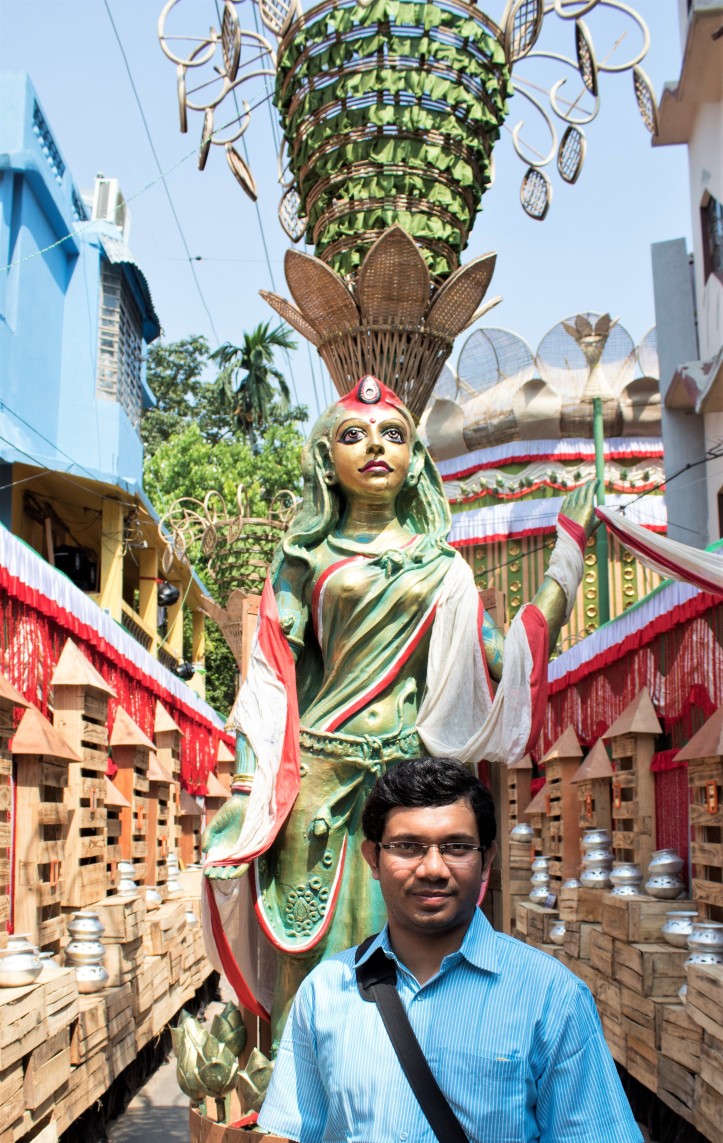 Saptami pujo porikroma was a lot of fun, but these two pujas were the undoubtable highlights. Pujo is a very special time for Bengalis, who meet and greet friends and families with whom we remain out of contact almost a whole year. Durga Puja will never cease to be an amazement. It’s in our culture, our blood. Now, what else is left? Well, nothing’s ever complete to us without food! So here’s hoping that you had a swell time gorging on this post! And this is me, signing off with a delicious custard dessert! 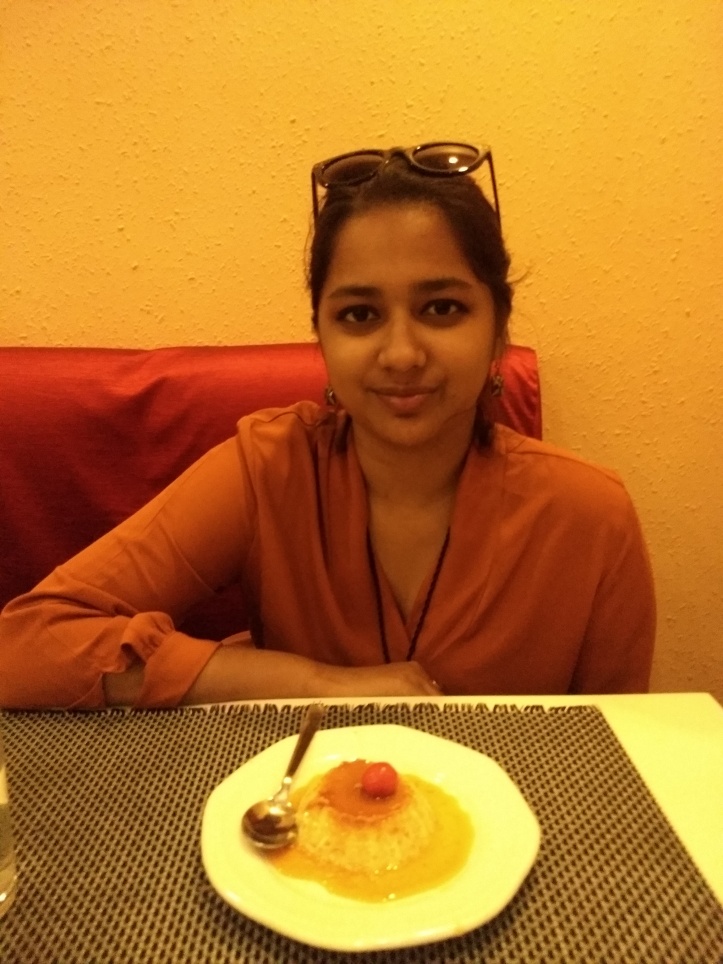 Photographs are courtesy of Rajib Sardar. You can get him on Twitter at @r_sardar22 or Instagram at @rajibrsardar22 , or else just contact me for any writing at @ria1606roy. 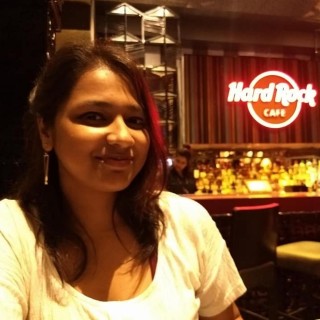