Wrote it up as a lazy after-thought, in an afternoon. Just a regular Wednesday afternoon.

After the Butter Chicken Masala recipe was made successful for the first time today, I picked up the camera again and checked the charge. Two marks left. More than enough. The sky was already darkening, but not due to the Sun going down. Dark columns of a potential thunderstorm were brewing above and suffice it to say, there was literally no silver lining. It might have been harmful to my mom’s digital camera if I took it to the terrace, so for the time being I settled in the verandah facing the back alley.

Closing my eyes and being very still, I could faintly hear a neighbour playing soothing alternative rock in medium volume, just enough for the music to reach, but too low to discern the string of words with it. It calmed my nerves. The hassle of constantly turning and maneuvering the cooking spud in the frying pot was taking its toll, though. There was numbness and at the same time a dull ache in the right hand. But sitting still was necessary, if only to take a handful of good photographs among a hundred with a clear mind.

There was rustling to one side of the verandah, and I focused on it. The wind wasn’t blowing too hard, only just to avoid sweating. I opened my eyes slowly, there was a stream of white light, and then the vision cleared, the color enhanced and rich after a necessary rest.

The clouds hadn’t rolled out just yet, they were comfortably making camp above our heads. Any moment now, the rain would come. So I grabbed the camera and clicked a few shots from the railing. 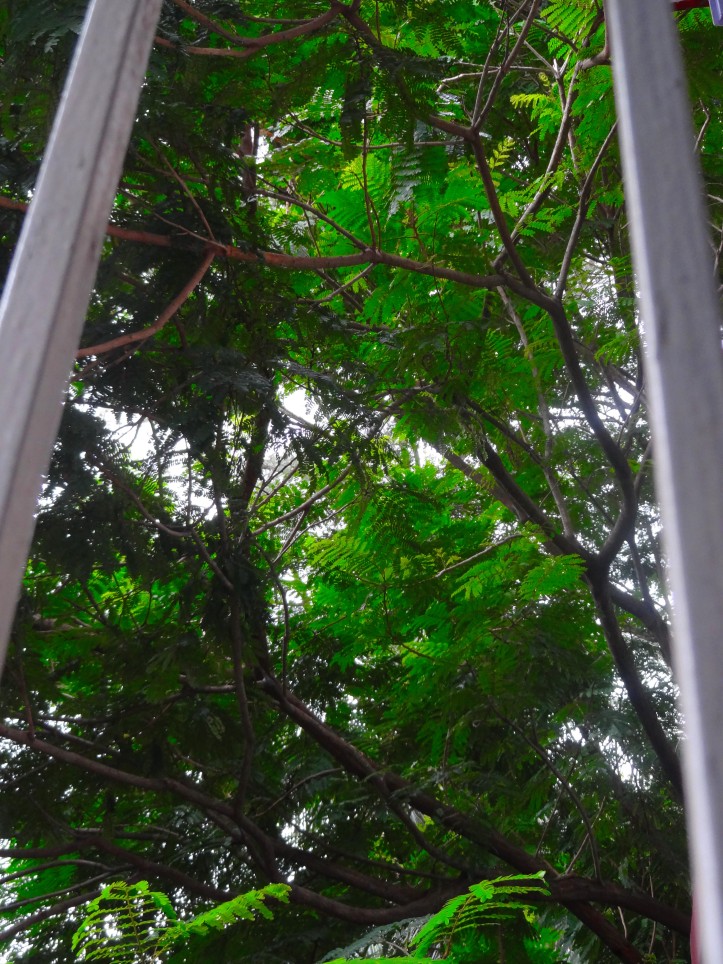 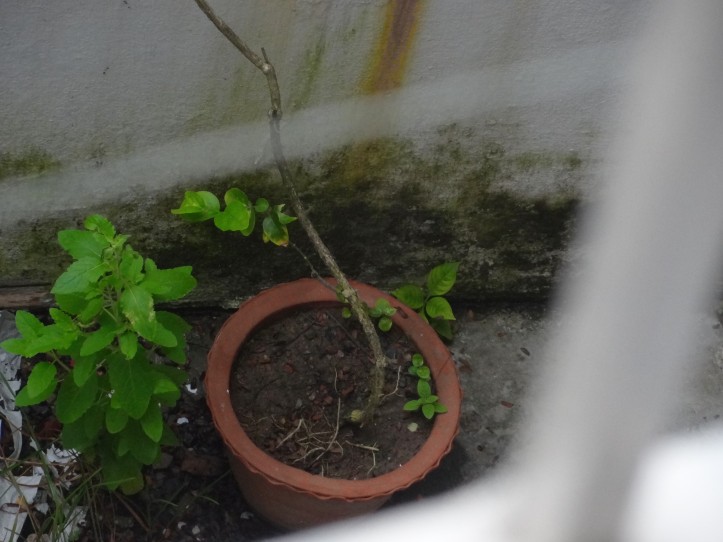 The range of view wasn’t much from here, so instead I focused on the little things inside home. Recently, our apartment’s been renovated and frankly it’s a mess (it will be until next year when my sister’s school ends). Mess of things is what I secretly enjoy!

This custom made vase was a plant holder before everything in our house turned upside down and then it’s use was redefined: as a clothes clip holder. Arguably much better than flimsy plastic ones.

Then a few others. Honestly, I suck at the whole photography thing, but it helps calm the soul once in a while.

Like that sad scene from the film Lagaan, the clouds suddenly cleared, but instead of the general reaction, I picked myself up rapidly, made myself a cup of tea and headed for the terrace. The clouds had receeded quite a distance then. I was relieved 🙂 and continued to look for pictures of man-made distractions. 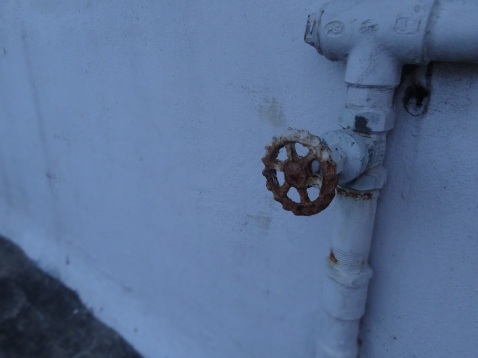 From top left, clockwise: A rusty water outlet, a dish perched, the highest point on our terrace, and the Higland Park Rise behind our backyard.

Nature was finally offering some really amazing views, so I changed my focus on them.

So many kites flying, courtesy of the Viswakarma Pujo, though it had ended the day before. 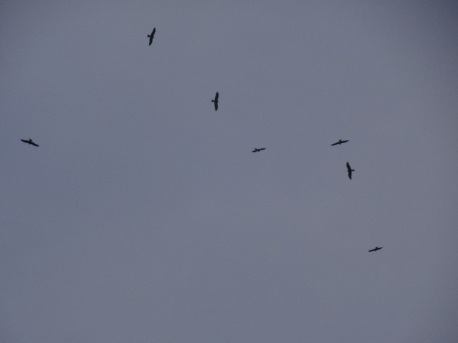 The birds were flying in no specific order. They were sure having a chaotic conference 😛

Turning to the sky, I witnessed this regular yet magnificent color outburst from heavens.

It turned dark soon after, the clock said it was 6. Really, the day was ending much sooner, and it would gradually diminsh as winter approaches. But I had my fun for the day 🙂 These pictures will forever serve as an outstanding reminder of that solitary afternoon.

Living in this surreal metropolis named Calcutta, I seldom find a day where it doesn't surprise me. Go on, have a good look at the blog and don't forget to tell me your precious thoughts!
Follow VIBES OF A CALCUTTAN on WordPress.com
Join 297 other subscribers